The Acting Principal Chief of Mokhotlong Chief Lerotholi Mathealira Seeiso has strongly appealed to the villagers of Nkotoane and Moshemong to protect pastures for improvement of their livestock.

Seeiso said this when addressing the chiefs and villagers at a gathering that was held to resolve boundary disputes between the Chiefs of the said villages at Thoteng ea Abraham in the district yesterday.

He said both chiefs should also stop their boundary disputes and strive for peace and unity in their neighbouring villages adding that they are not only neighbours but they also relate.

He said since he was appointed to act in the Office of the Principal Chief of Mokhotlong from April last year, he learnt that the villagers of Nkotoane, Bafali and Moshemong keep fighting over reserved pastures.

He also urged those who are reported to have brought their livestock home from the cattle posts to return them with immediate effect as they are the ones destroying the grazing land.

Chief Seeiso said harsh legal measures will be taken against those who will not obey the order. 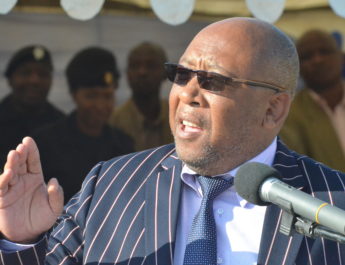 The Minister of Communications, Science and Technology, Chief Thesele ‘Maseribana says Makoanyane accident where 15 passengers died as a result of overturning of a minibus has been declared as a disaster by the office of the Prime Minister.