Letsosa said this during a public gathering where his ministry was issuing identity documents.  He said in most cases, victims are involved in unpaid forced labour and sexual slavery and are usually killed afterwards. He aalso said it is in rear cases where victims escape alive.

A Member of Parliament for Thabana-Morena Mr. Selibe Mochoboroane thanked his counterpart for bringing services closer to the community.

He explained that the initiative is important as it helps vulnerable groups of people who are unable to access these services.

Mochoboroane indicated that the ministry is serving the community with loyalty and respect, urging them to continue with the good work of teaching them about safety measures in regards to human trafficking issues. 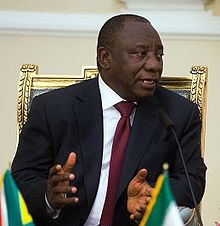 Mineworkers Unions have called on South African President – Cyril Ramaphosa to urgently intervene to amend the safety legislation at mines to enable greater rights to refuse to work in hazardous situations.

The eco-culture organization says the government should do more to fight the pollution of water resources. This after the mass death of fish in Maqalika dam last weekend.

Al Jazeera Media Network has assigned a legal team to refer the killing of its journalist Shireen Abu Akleh to the International Criminal Court -ICC.